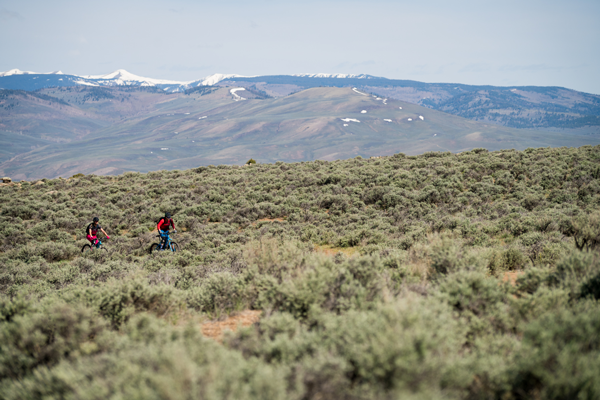 Three years ago, Colorado Parks and Wildlife (CPW) land managers started discussing e-bikes at their Trails Program meetings?what they were, how they were growing in popularity and how their use might affect different agencies and landowners throughout Colorado.

?We figured we should start learning about e-bikes,? said Nick Dellaca, at the time the Trails Coordinator for CPW’s Northeast Region, and now the Colorado State Trails Program Manager, ?and also to figure out how they could benefit us as an agency.? His regional office purchased an e-bike, equipped with features ranging from a full throttle to pedal assist, and then offered each of the state parks in the region the opportunity to take it for a spin.

?We wanted to give staff a better idea of the power and capabilities the bikes have,? said Dellaca. ?Both in their applications as a tool for the Parks and how they might affect different user groups on trails.?

So, how have e-bikes been used in Colorado’s state parks?

Emergency access. A ranger on an e-bike can respond to a lost or injured hiker faster than a ranger on foot, and sometimes reach areas that vehicles cannot.

E-bike use reduces the cost of maintaining fleet vehicles and decreases oil consumption, especially during the busy visitation season when parks have higher seasonal staffing.

E-bikes in parks also allow rangers to more efficiently facilitate contact with visitors. In campgrounds and smaller areas where rangers and park guests interact frequently, the maneuverability of an e-bike makes it more practical than using a vehicle.

Although e-bikes haven’t yet been put to the test of hauling tools or equipment or being used for trail maintenance at CPW, the potential for that application exists and CPW is considering it.

Since CPW’s introduction of the e-bike in 2014, Staunton State Park, Colorado’s newest state park, has purchased a full-suspension pedal assist bike. Not only has it helped rangers access hard-to-reach trails in the park’s extensive network, but it has become a crucial conversation piece as well.

?People stop to ask, ?What kind of a bike is that?’ and they’re curious about how it works,? said Dellaca.  ?As land managers, we really see the potential benefit of e-bikes to the parks, both as an educational tool and for our staff.?