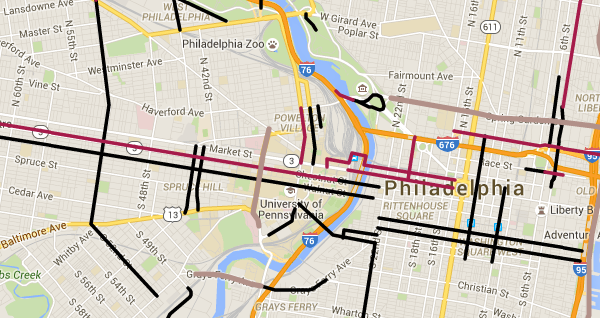 A map of possible future protected bike lanes proposed by the Bicycle Coalition of Greater Philadelphia.

The bike-friendliest big city on the Eastern Seabord has been falling a bit behind the times, but it’s lined up for an upgrade.

Philadelphia has come a long way on the network of conventional bike lanes that it started striping in 1995. With about 2 percent of commutes by bike and a rich biking culture, it’s made bike transportation noticeably more common than in peer cities like Boston, New York and (elsewhere in the country) Los Angeles, Chicago, Dallas and Houston.

But over the last few years, a second city — Chicago — has been making a dash for Philadelphia’s longtime status as the country’s bikingest city of more than 1 million. In 2011, Chicago began rapidly installing one of the country’s best-connected networks of buffered and protected bike lanes in its downtown and central neighborhoods. That corresponded to a steady rise in biking, and at last count, Chicago was nipping at Philadelphia’s heels in its percentage of commutes by bike.

Now, Philadelphia’s new mayor has taken a page from Chicago’s book. In the run-up to his landslide victory last May, Jim Kenney pledged to build 30 miles of protected bike lanes in the next five years.

That’d be enough to reverse what Kenney had called an “embarrassing” lack of the low-stress infrastructure in Philadelphia, and then some. It’d be more protected bike lane than any city but New York has currently built, enough to once again place Philly clearly among the nation’s leaders for comfortable biking streets. 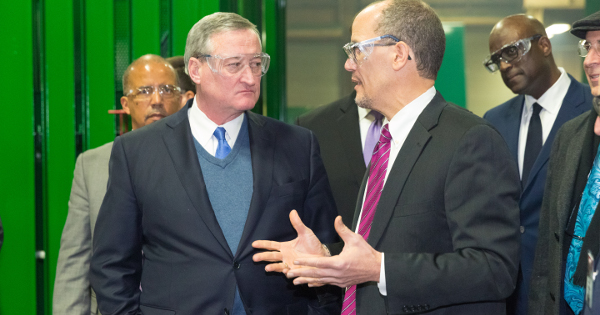 Sarah Clark Stuart, executive director at the Bicycle Coalition of Greater Philadelphia, said in an interview Tuesday that Kenney “seems very inclined” to follow through. Earlier this month, he announced the creation of the city’s first Office of Complete Streets. The new commissioner of that office will be tasked with executing Kenney’s campaign pledge to “break down silos and coordinate services amongst departments, such as streets, water, and police.”

“New protected bike lanes, I think, are going to be driven by that office,” Stuart said.

In a transition report circulated Tuesday, Kenney’s team made its first public mention of his enthusiasm for protected bike lanes since taking office next month. It added that his administration aims to add 15 miles of bike lanes (protected and otherwise) in 2016 alone.

Kenney and his new complete streets commissioner, whoever it is, will have plenty of help. Last month, the Bicycle Coalition released its own proposal for where to put 30 miles of protected bike lanes around the city, most prominently with a JFK/Market couplet through the heart of downtown.

Few U.S. cities have a stronger sense of their own history than Philadelphia. Thanks to two very different men — Mayor Michael Nutter and now Mayor Jim Kenney — it looks like being a great city to bike in is going to be a big part of the city’s future, too.

The Green Lane Project helps U.S. cities build better bike lanes to create low-stress streets. You can follow us on LinkedIn, Twitter or Facebook or sign up for our weekly news digest about protected bike lanes. Story tip? Write michael@peopleforbikes.org.